With a career spanning more than three decades, Chris has taken the family-owned Ilitch companies to remarkable new heights. Today, these food, sports and entertainment and real estate development companies employ tens of thousands of people across the world and generate billions of dollars in annual revenue.

In his capacity as Chairman and CEO of the Detroit Tigers, Chris has been a strong advocate of the organization’s ongoing commitment to cutting-edge analytics and advanced technologies, while aggressively supporting the team’s core sustainable success pillars: superior scouting, drafting, and talent development. Chris shares these same principles as Governor, President and CEO of the Detroit Red Wings, where leadership is working relentlessly to bring a Stanley Cup back to Detroit.

A long-time champion of the city, Chris is passionate about continuing to help revitalize Detroit. In addition to Little Caesars Arena, other recently completed landmarks by Olympia Development include the Little Caesars world headquarters campus expansion on Woodward Avenue, The Mike Ilitch School of Business at Wayne State University, and the Columbia Street dining and retail destination. These developments created more than 20,000 construction and construction-related and more than 4,000 permanent jobs, and also contributed millions of dollars to workforce training programs in the city of Detroit. A series of new projects are under construction which will, in the next few years, bring additional housing, retail, dining and office space to the area.

Chris is also Chairman of Ilitch Charities, a non-profit organization which supports people in need with financial and in-kind donations and sponsorship. From youth development to community revitalization, Ilitch Charities continues to make an enduring impact in the communities in which the Ilitch companies serve, with more than $207 million in charitable giving since 2000. Recent significant initiatives on a local and national level include Little Caesars’ donation of one million pizzas to first responders across the country, as well as the Detroit Red Wings Learn, Play, Score program, a one million dollar initiative with the NHL/ NHLPA Industry Growth Fund to expand access to hockey for more than 30,000 children across Detroit.

A proud father of three, Chris resides with his wife Kelle in metro Detroit. 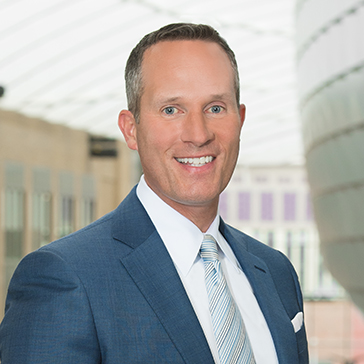