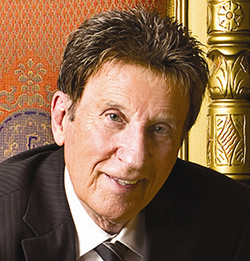 Mike Ilitch was a once-in-a-generation entrepreneur and champion for Detroit.

He and his wife, Marian, invested their family savings in 1959 to open the first Little Caesars store in Garden City, Michigan, a suburb of Detroit. That single mom-and-pop pizza shop grew into the third largest pizza chain in the world with stores in more than 27 countries and territories worldwide, including in each of the 50 U.S. states. The success of the business was built upon the exceptional quality and value of the Little Caesars menu and Mike’s marketing savvy and imaginative ideas in production.

The growth of Little Caesars helped Mike and Marian create other leading brands in the food, sports and entertainment industries.

The couple purchased the Detroit Red Wings in 1982. While the team was known as the Dead Wings at the time, Mike and Marian believed they were a sleeping giant and immediately took charge to turn the team around. By 1997, the Red Wings won their first Stanley Cup in 42 years, and they went on to win three more. Four Stanley Cup parades held along Woodward Avenue in Detroit attracted hundreds of thousands of people, many from the suburbs who had not been to downtown Detroit in decades. Detroit became known as Hockeytown and brought a sense of pride to the area’s hockey fans and the community as a whole.

Throughout Mike’s life, he remained true to his hometown and was a zealous supporter of Detroit, working tirelessly to help it prosper and to bring pride to the city. In 1988, Mike and Marian purchased the neglected Fox Theatre and carefully restored it to its original 1928 splendor.

One year later, they moved the Little Caesars world headquarters from the suburbs into the newly renovated Fox Office Center adjacent to the restored theatre. This was during a time when many businesses were fleeing the city. Restoration of the theatre and renovation of the office building brought new life to the area. Currently, the headquarters campus is being expanded with an addition of a new nine-story, 234,000 square foot building next door to the Fox Theatre.

Mike displayed further commitment to the city he loved when he purchased the Detroit Tigers in 1992 and built a new state-of-the-art ballpark for the team. Remembering his early years as a minor league baseball player with the Tigers, he did everything in his power to make the fan experience at Comerica Park a memorable one.

The new ballpark enabled Detroit to successfully host the MLB All-Star Game in 2005 and also helped promote Detroit as a tourist destination when the Detroit Tigers hosted the World Series in 2006. Mike also encouraged the Ford family to bring the Detroit Lions back to Detroit from the suburbs and build a new stadium right next door to the ballpark by relinquishing a portion of land to make way for the new stadium. The new football venue allowed Detroit to host the Super Bowl in 2006.

Today - true to Mike and Marian's vision for a bustling downtown area - the Ilitch organization is developing The District Detroit, a dynamic urban destination that provides a dense neighborhood experience featuring a variety of developments alongside Detroit's premier sports and entertainment venues. This includes the new highly innovative and state-of-the-art Little Caesars Arena, home of the Detroit Red Wings and Detroit Pistons, and the recipient of the 2018 Sports Facility of the Year award, presented by Sports Business Journal.

Mike and Marian believed passionately in giving back to the community. As the parents of children who played hockey, the couple wanted to provide other children the opportunity to play the sport as well. So, they established the Little Caesars Amateur Hockey Program in 1968, and it has provided opportunities for tens of thousands of youngsters to play the great game of hockey over the years. Hundreds have gone on to play at colleges, universities and in the National Hockey League.

Among his many contributions to others, he established the Little Caesars Love Kitchen in 1985. With two trucks on the road to serve those in need, these restaurants on wheels have served more than three million people.

Additionally, inspired by the story of a veteran returning to civilian life, Mike founded the Little Caesars Veterans Program in 2006. He had read a newspaper story about an Army Sergeant who had tragically lost both his legs during combat in Iraq. As a veteran himself, Mike was impressed with the can-do attitude of this veteran. The Little Caesars Veterans Program that followed provides honorably discharged veterans with financial incentives and other support to help them open a Little Caesars franchise.

Since 2000, grants and giving from Marian and Mike, the Ilitch companies and its charitable affiliates have totaled $220 million. This includes Marian and Mike's personal gifts of nearly $50 million to Detroit's Wayne State University - $8 million to the Department of Surgery and $40 million to build a new home for the Mike Ilitch School of Business, prominently located on Woodward Avenue.

Mike has received numerous business, cultural, and philanthropic awards, including:

Locally in Detroit, Mike has been honored for his efforts in the community with the Joe Louis Brown Bomber Jacket Award, the Distinguished Martin Luther King, Jr. Community Service Award, the Shining Light Regional Cooperation Award and the Edward H. McNamara Goodfellow of the Year Award. He was also given the key to the city.

Mike Ilitch was a remarkable American success story. In 2012, he wrote, “Develop a love for all people; be humble; work hard. I guarantee you will be successful in life.” He did just that and had a life well lived.