Marian Ilitch is a leading entrepreneur in the food, sports and entertainment industries. As a first-generation American, the daughter of Macedonian immigrants raised on grit and hard work, Marian has been recognized as one of the most successful businesswomen in the country.

Marian started out in the food business as a young girl filling napkin containers and salt and pepper shakers in her father’s restaurant. She graduated from Fordson High School in Dearborn, Michigan, and attended Dearborn Community College where she studied liberal arts and completed an accounting course.

Marian’s first paying job was at SS Kresge in Dearborn. Before marrying her husband and lifetime business partner, Mike Ilitch (1929-2017), Marian worked as a reservation clerk for Delta Airlines in Detroit – Mike’s hometown. She was captured by the hustle and bustle of working downtown during Detroit’s prime.

Marian was a full-time mother until after her and Mike’s third child was born. The couple then invested their family savings to open their own business – a single Little Caesars pizza shop in Garden City, Michigan.

Mom-and-Pop Business and Beyond

Working hand-in-hand, Marian and Mike grew a single, family-owned Little Caesars pizza store in Metro Detroit into the third largest pizza chain in the world with stores in more than 27 countries and territories worldwide, including in each of the 50 U.S. states.

Channeling the love she developed for Detroit as a young professional, Marian became a pioneer in the redevelopment of downtown Detroit when she and Mike purchased the Fox theatre in 1987 at a time when most businesses were fleeing the city. They restored the neglected theatre to its original 1928 splendor and a year later moved their business headquarters to the adjacent office building.

With a reputation as a dynamic force in the entertainment industry, Marian invested in Detroit’s MotorCity Casino in 1999 when the Detroit market introduced three temporary casinos. In 2005, she became sole owner of the casino and soon embarked on a $300 million expansion and renovation project to add a luxury hotel, spa, conference center, several new restaurants, an 1,800-seat theatre and a permanent gaming area. The expanded MotorCity Casino Hotel was completed in 2008.

Today, the Ilitch organization is developing The District Detroit, a dynamic urban destination that provides a dense neighborhood experience featuring a variety of developments alongside Detroit's premier sports and entertainment venues. This includes the new highly innovative and state-of-the-art Little Caesars Arena, home of the Detroit Red Wings and Detroit Pistons, and the recipient of the 2018 Sports Facility of the Year award, presented by Sports Business Journal.

Investing in the Community

Their Little Caesars Love Kitchen program, two big-rig trucks on the road to serve pizza meals to those in need, has served more than three million people and has been recognized by three U.S. Presidents.

Since 2000, grants and giving from Marian and Mike, the Ilitch companies and its charitable affiliates have totaled $220 million. This includes Marian and Mike's personal gifts of nearly $50 million to Detroit's Wayne State University - $8 million to the Department of Surgery and $40 million to build a new home for the Mike Ilitch School of Business, prominently located on Woodward Avenue.

Marian has received many awards and honors including: 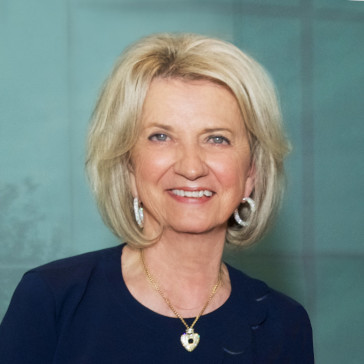